The Ultimate World Leader Political Science MegaGame
One of the largest MegaGames ever held in America will take place on Saturday morning 10am-3:30pm Aug 3, 2019, at Gen Con in Indianapolis, Indiana. 80 players will lead 30 different nations, criminal organizations, and international investigation teams. You will be given four hours to resolve a global pandemic in the midst of multiple panic inducing apocalyptic crises.
30 Teams, 80 Players, will you and your crew manage keep the world from falling apart?

​​A political science or wargame simulation in which one hundred players roleplay as the investigators and world leaders of various different nations, corporations, and criminal organizations over the course of four hours.

Players pursue conflicting agendas but ultimately they all win or they all lose. 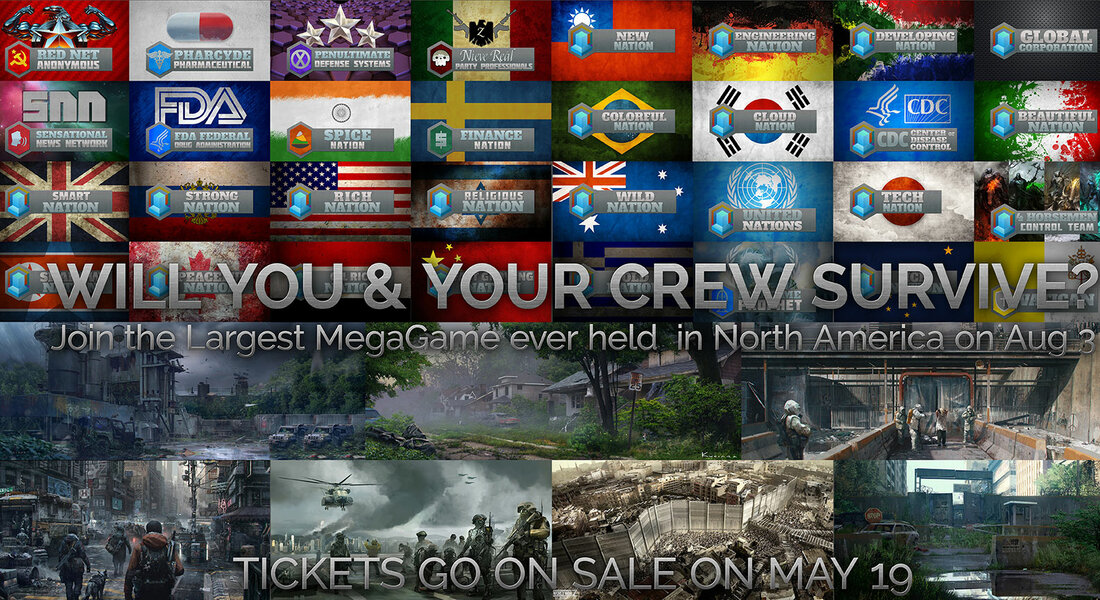 ALLIANCE is built upon trade. You start with a surplus and deficiency in the five different color currencies of the game in the form of colored poker chips. With these you can build national institutions to upgrade your nation. You can also purchase militaries.

You can also trade the various different tech cards which will go out each of the 8 game days through the scientist artifact dice race. By pooling your resources together allies will be able to build tech pyramids with powerful mechanic effects.

The above mentioned components are mostly what is traded in the first half of the game. But by the second half intel, rumors, and secrets will be just as common. Mid-game crises will unfold throughout the game as new components emerge on the huge war room maps, video announcements will broadcast news of these updates between game days, and certain teams may be notified early on through secret documentation. At any point in the game it will be difficult to know exactly what other intel each nation is holding or witholding until it is too late creating a constantly overwhelming sense of mystery around the room.

Several new drug related teams, both legal and illegal are being introduced into the game as well as some criminal organizations, and competing corporations.
We also thought it important to add a few religious factions.

On top of the core mechanics, ALLIANCE Last Days will have multiple minigames that emerge depending on how well each nation deals with the new global pandemic spreading across the nation. 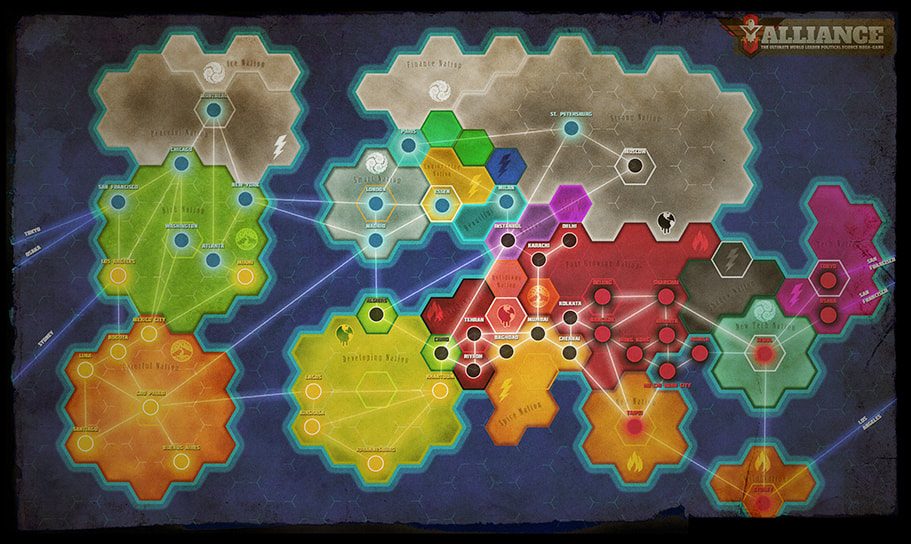 If the C.D.C cannot manage the outbreaks then the nation teams represented on their map will have no choice but to defend their capital against the rioting hordes.

Triage: Each player on the C.D.C. is from a different nation so it is always interesting to see how political affiliations influence morally ambiguous choices about who should and who should die. 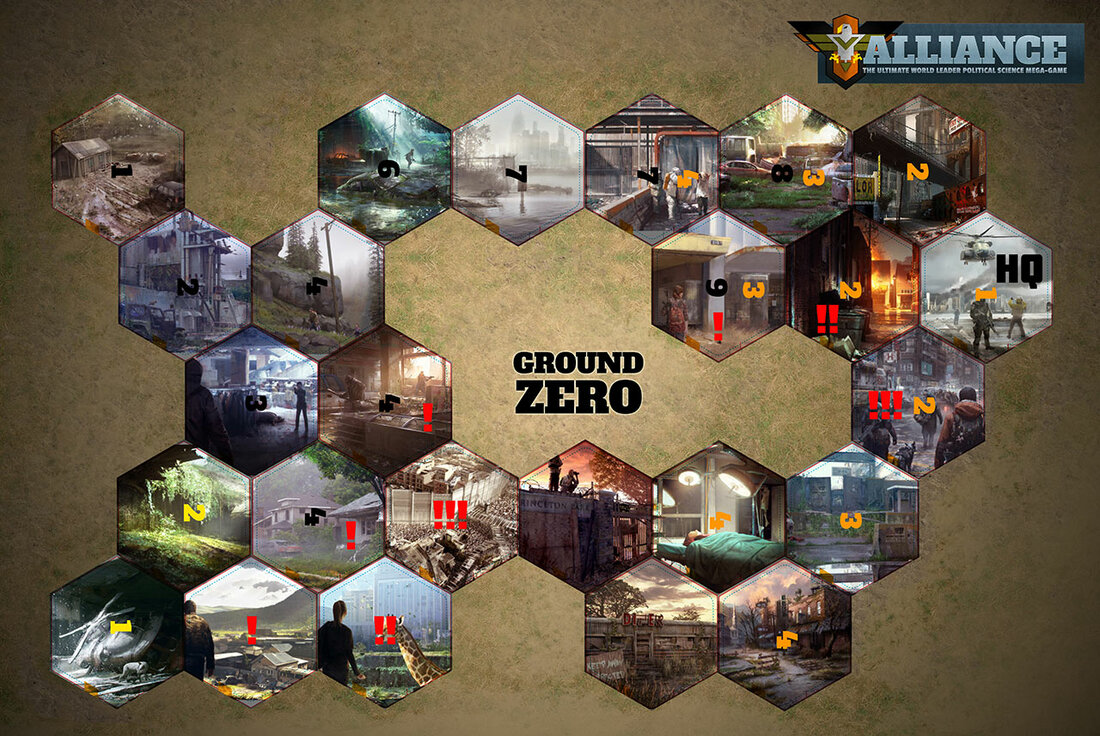 At any point, players may be exiled into Ground Zero or they may choose to go and investigate Ground Zero. Through a combination of deck building and T.I.M.E. Stories decksploration mechanics, teams of players will play as 5 different factions all traveling around a mysterious city lost to the plague trying to discover the source of the virus while also deciding whether to trust or fight against the other factions in pursuit of their own conflicting objectives. ​ 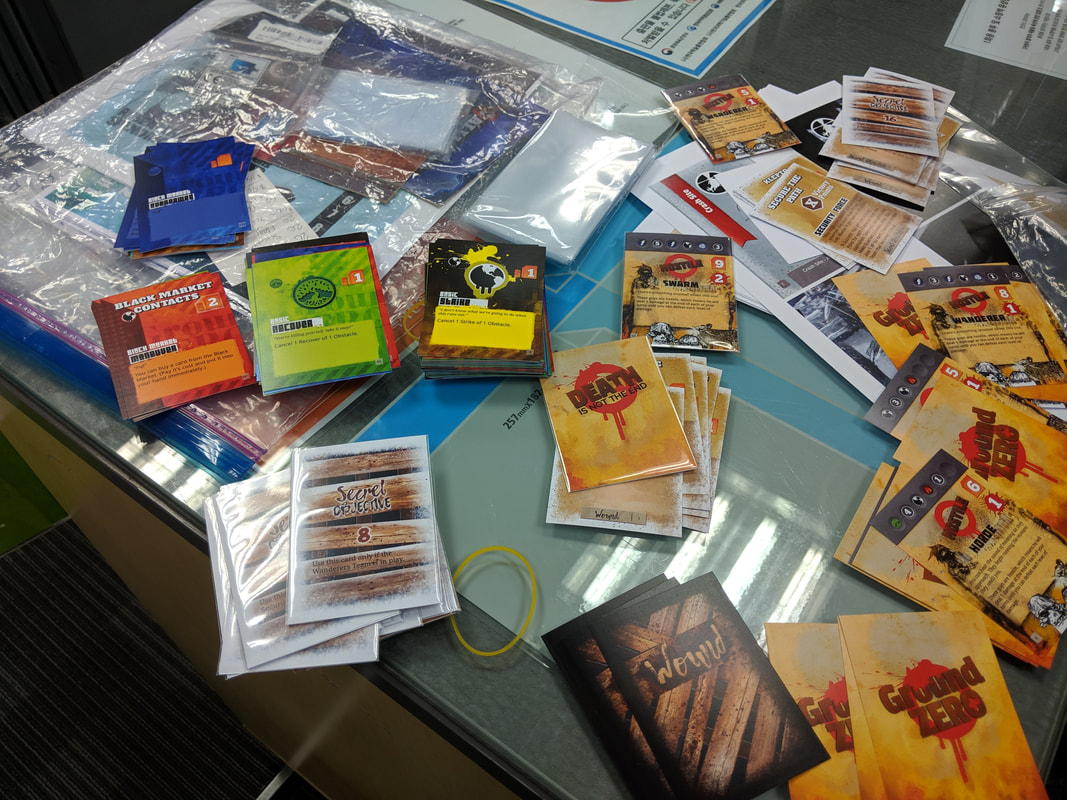 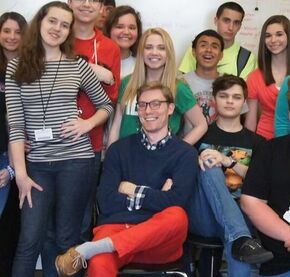 I created ALLIANCE together with my game design students in 2015. Since then I've published a couple games and successfully Kickstarted Great Boy the Game. This will be the second time running ALLIANCE Last Days at Gen Con. You can hear more about the previous version of the game from Peter Nixon on his MegaGame podcast. You can also see photos of past games at our International Peace Games facebook page.

In 2018 I moved to South Korea and have run the game in Daejeon, Incheon, and Seoul, South Korea. I also ran the game at Tsing-hua University in Shin-chu, Taiwan and National Taiwan University in Taipei, Taiwan. Later this month I will run it in Singapore and Malaysia. ALLIANCE just might be the megagame that has been more times for more players in more countries than any other megagame.